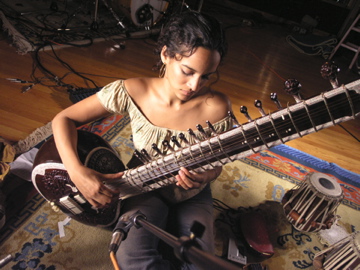 Anoushka Shankar (1981) is a leading name in the global music scene today. The immensely gifted musician and composer was trained in Indian classical music on the sitar from the age of nine by her father, the legendary Ravi Shankar, and grew up performing in prestigious worldwide venues such as Royal Albert Hall and Carnegie Hall. Anoushka’s dynamic and spiritual musicality has gained her wide international recognition and numerous awards, including 5 Grammy Award nominations. Up to date, Anoushka has released nine albums and recorded with renowned musicians such as her half-sister Norah Jones, Karsh Kale, Sting and many others.

Anoushka will be presenting her highly anticipated new album Land of Gold in Muziekgebouw aan ‘t IJ on 8 October 2016. It is her heartfelt response to the humanitarian drama of refugees. “Everyone is, in some way or another, searching for their own Land of Gold, a place of security, connectedness and tranquillity, which they can call home. At the end of the day, we all have the same dreams and we all have the right to search for it. My new album is about that & I hope you enjoy”, says Shankar.

Land of gold is a fascinating and dynamic sample of what Anoushka is known for; blending boundaries between different musical genres in her own unique and fresh way. In ‘Land of Gold’ acoustic and electric instruments are combined and Indian raga is mixed with electro and jazz. Anoushka is accompanied on stage with supporting musicians Sanjeev Shankar, Manu Delago and Tom Farmer.

Sanjeev Shankar will join on stage with his searingly emotional shehnai, an Indian double reed oboe. Born in a family of musicians of Banaras gharana in which Shehnai & flute are played for the last 450 years and over, Sanjeev manifested his strong affinity towards music at the age of seven. Sanjeev had the privilege to learn Shehnai from his father Daya Shankar & grandfather the legendary Shehnai player Pt. Anant Lal. He also consolidating his knowledge under the able guidance of the legendary sitar maestro Pt. Ravi Shankar.

Manu Delago, Austrian percussionist/composer and frequent collaborator of Björk, co-wrote nearly all the pieces on the album. Delago is playing percussion and the Hang, a relatively new hand crafted percussion instrument related to the steel-drum and invented in Switzerland.

The English bassist Tom Farmer has earned his name in the world of jazz. Farmer is a member of the multiple award-winning ‘Empirical’ quartet. Playing on acoustic bass and keyboards.